I've often thought about making games for cats... but I never thought of this. 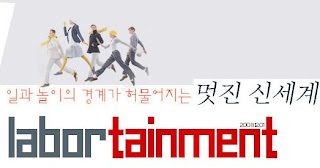 A nice article about "behavior recycling" by @goguma. Labortainment is my new favorite word.
Posted by Jesse at 12:27 AM 1 comment:

A Triumph for Foldit!

Dedicated readers will remember my post about Foldit about a year ago. Today they have a real triumph to announce! AIDS researchers have been trying for ten years to understand the folding pattern of an enzyme from a retrovirus found in rhesus monkeys, in the belief that understanding that might give broader insight into how to stop other retroviruses. Top scientists couldn't do it. Supercomputers couldn't do it. But a couple dozen videogame players did it in ten days.
Posted by Jesse at 10:15 AM 3 comments: 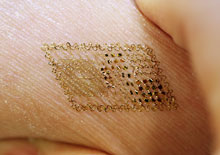 Researchers at University of Illinois have developed a kind of temporary tattoo that can sense electrical signals in the body. They are using for medical purposes, but I think I smell a game controller! They've already tried putting one on the throat, and analyzing signals to see if they can see what words you are saying. Full article here.
Posted by Jesse at 12:49 PM 1 comment:

Ahoka? Akoha? I never could get the name right. Doesn't matter now. These guys were some of the first on the gamification bandwagon, starting up in 2008. It was an interesting idea, giving trading cards to people as a way to encourage acts of kindness. It sounded good in theory, anyway. I received a few from students, and was always too embarrassed to pass them on. Why would I pass on an obligation? As far as I was concerned, the cards might as well have been +10 Guilt cards. Someone told me a story once that they got a "take a friend out for coffee" card, and so they did. At the coffee, they gave the friend the card, and explained the system. The friend was apparently incensed: "I thought you wanted to go for coffee because we were friends -- turns out you're just playing some damn game." Ah, the perils of extrinisic reward systems. As Randy Pausch often said, "You can tell the pioneers by the arrows in their backs." Aloha, Akoha. Your experiment was noble and brave. May you receive a +Infinity in that big Internet in the sky, and may we all learn from your example.

Here's the complete text from their farewell letter:

Dear Akoha Community Member,
We're writing today to tell you the unfortunate news that after 3 years of operationAkoha.com will be closing its doors on August 15th 2011. Please note that you will be able to sign-in and play missions up until that date.
In the fall of 2007 we set out to create a new type of community to highlight fun, real-world activities that would help people explore and enjoy life to the fullest. From all the amazing missions that the Akoha community has played over the past 3 years we feel comfortable in saying that we were able to reach that goal.
Unfortunately and despite our best efforts, we weren't able to generate enough revenue to cover our expenses so we're left with no other choice but to close the site.
We'd like to thank all the dedicated Akoha team members who have contributed their energy and talents to the project and also to our investors for the support that they have shown us over the past few years.
And finally, we'd like to thank you, our incredible community members, for being part of this journey with us. We have been delighted, inspired and moved by all the wonderful missions you have played. We hope Akoha has brought a little additional enjoyment and satisfaction to your lives.
For those who would like to save a pdf archive of all your Akoha activity please see below for instructions.
Thanks again for being part of this incredible journey with us!
Yours,
The Akoha Team
Posted by Jesse at 10:33 PM 4 comments: 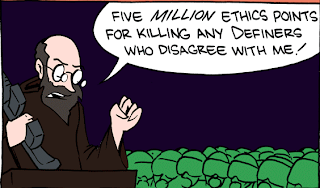 The popular Internet comic Saturday Morning Breakfast Cereal paints a picture of the coming Gamepocalypse. Thanks to Justin Devore for the tip!
Posted by Jesse at 4:33 PM 2 comments: 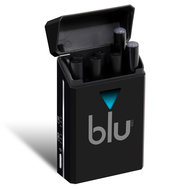 Do you like inhaling nicotine vapor... but hate doing it alone? Well, thanks to disposable computing, now you don't have to! Buy a pack of Blu nicovaporettes, and it will light up and vibrate when you are nearby someone else who has a pack! It's not a game yet, but give it five seconds. NYT article here. Thanks to Oscar Ramirez for the (filter) tip! (Wait... these things don't have filters... do they? I miss when vice was lo-tech.)
Posted by Jesse at 9:09 PM 2 comments:

Alphabetizing books on a shelf can be a very soothing activity. But when some cretin gets books out of place, it can be years before anyone notices. Enter ShelvAR -- the system that gives instant videogame feedback about the placement of every book in the library! Thanks to Mk Haley for the tip.

Crawling out of the flophouse
I saw the mayor stealing my junk
I doth protest, citizens arrest!
Now my body's in his trunk.
Where's the Shadow Government when you need it?
-TMBG 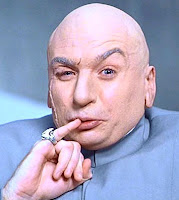 Here it is! It's here! Playmatics has teamed with the Millenium Institute to create Shadow Government, a game based off of real world economics, sustainability, and other data that will allow players to play the whole world as a game. TechCrunch article here.

Playmatics is super smart -- but like Dr. Evil found out, conquering the world with $1M is a lot harder than it used to be!
Posted by Jesse at 11:44 AM 1 comment:

Manipulating the Planet for the Sake of a Good Game 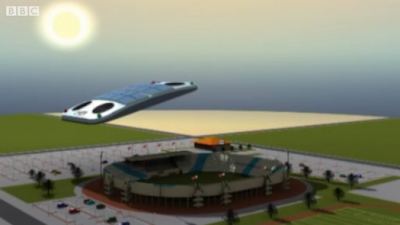 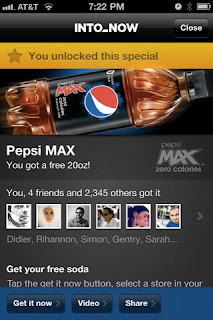 That's right! Whenever an ad comes on for Pepsi Max, the first 50,000 people who tag it using the IntoNow app get a free Pepsi Max! Check out the Mashable article, and enjoy this deliciously aspartame rich, double-caffeinated introduction to the televised portion of the Gamepocalypse! Special thanks to Matthew Copeland for the tip!
Posted by Jesse at 7:54 PM 1 comment:

World of World of Warcraft World under construction! 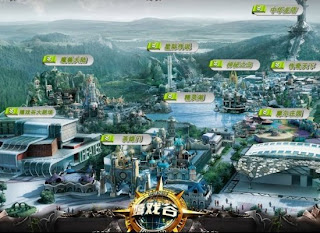 In my Visions of the Gamepocalypse talk last year, I predicted the coming of a LARPing theme park which I jokingly called World of World of Warcraft World (WoWoWW). And it looks like something of the sort seems to be happening! A park in China called "Joyland" will have a mix of Warcraft and Starcraft elements. When it will open is unclear. What is clear, though, is that a major amusement park BASED ON A VIDEOGAME is being built right now. Two tickets to the Gamepocalypse, please!
Posted by Jesse at 8:15 PM 3 comments: 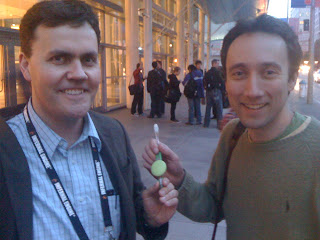 This year at GDC, just one year after I delivered my famous "toothbrush talk", Brian Krejcarek has now presented me with a functioning Green Goose points-giving toothbrush! There was some dispute over whose idea it really was... 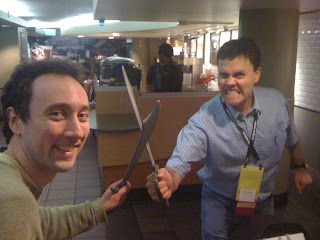 Actually, that's just us trying out the toy swords he has on the same system! +5 points for toothbrushing, +5 points for eviscerating your enemies. Neat! Thanks to Floyd Mueller for the photos! :)
Posted by Jesse at 9:21 PM 3 comments: 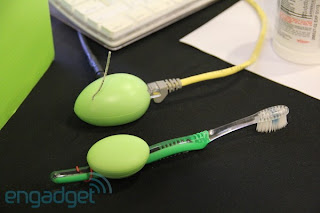 What I love about Green Goose is how incredibly flexible the system is. And Brian Krejcarek is super smart!
Posted by Jesse at 5:19 PM 2 comments: 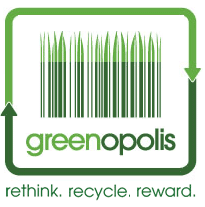 Waste Managment (you know, the garbage truck company) owns a company called Greenopolis (a recycling company) that has launched a Facebook game called Oceanopolis. It's, you know, a game about recycling. But here's the part where they drive their hybrid car into the Gamepocalypse: If you do real world recycling at Greenopolis recycling kiosks, you earn points for Oceanopolis, which you can then cash in for real life pizzas from Domino's, which generates pizza box waste to be hauled away by Waste Management! See? You recycle, and everyone gets richer! Except you.

Kognito Interactive has created a game that lets teachers practice identifying students at-risk for suicide. Their studies have shown that teachers who have played the game are more likely to identify at-risk students and intervene on their behalf. I strongly suspect the success of this system is likely to greatly increase the amount of training simulations that involve interviewing virtual characters. Thanks to Fiona McDevitt of Kognito for the tip!
Posted by Jesse at 3:08 PM 1 comment: 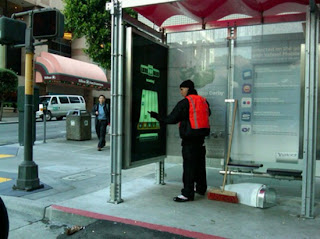 Let's say you are waiting for a bus, and don't have a smartphone. Or a DS. Or a book. And, further, let's say that you don't mind touching a public touch screen at a San Francisco bus stop. In that case, does Yahoo have a great surprise for you! Not only are they instrumenting twenty bus stops with videogames, but the neighborhood with the highest scoring bus stop will get a free block party! Thanks to Zach Coe for the tip!

Seriously, though. WEAR GLOVES.
Posted by Jesse at 2:44 PM 7 comments: 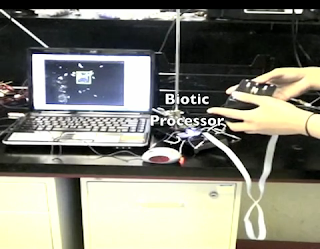 Ingmar Riedel-Kruse at Stanford has created a series of videogames which involve controlling REAL paramecia with electricity and chemicals, to make them part of simple arcade games. Why? Other than the pure joy of cruelty, "Riedel-Kruse says his larger ambition is to find ways to make the games useful, perhaps in the context of science education, or even as tools for crowd-sourced research projects." The link has several videos that must be seen to be believed. I predict games that involve all the things living in the finger grease on your iPhone. Thanks to Scott Landsman for the tip!
Posted by Jesse at 9:26 AM 2 comments:

The first Gamification Summit is this week. It's already sold out, however, you can still register to view streams of the talks. Lots of interesting speakers -- a great place to hear about the many experiments that are taking place in an attempt to accelerate the coming of the Gamepocalypse. Wish I could go!
Posted by Jesse at 3:29 PM 1 comment:

Hilarious idea! Battle corporate "favicons" against each other... from any website you choose! "Disney.com uses dysfunction against schellgames.com for two points of damage!" (Yeesh, that has actually happened) Anyway ... I think that Favimon is a sign of things to come! Thanks to Justin DeVore for the tip!
Posted by Jesse at 1:42 PM 1 comment: